This letter was written by 33 year-old Alonzo N. Coleman (1824-1879), the son of John Coleman (1794-1860) and Elvira Bannister (1804-1844) of Junius, Seneca county, New York. By 1857, Alonzo had relocated to San Francisco, California, where he was employed as a merchant at 46 Front Street. In 1858 he was boarding at 252 Powell Street. He appears to have remained in California throughout the American Civil War years and was enumerated there as late as 1870 as an importer of oil and lamps.

Sometime in the 1870’s, Alonzo returned to his home in Seneca county. He died very suddenly at the Washington Hotel at No. 1 Broadway in New York City on 3 June 1879. He never married and is buried in the same cemetery as his parents [Joslyn Cemetery] in Phelps, Ontario county, New York.

The owner of this letter claims it was addressed to Nathan Oaks, the stepson of Col. Elias Cost.

Your long looked for letter has at last reached me safely. It bears the date of November 17th — the first I have rec’d from you since my return. I had almost concluded that you had crossed yourself off from my list of old friends; but your letter has reassured me and I now feel again as in former times that you still number yourself as one of the friends of my boyhood.

The news yours brings me is various, but on the whole shaded with sadness. I feel in my heart to rejoice in your success and happiness, and sympathize with you in your afflictions, but I suppose that not being a father & not having lost a child, I cannot feel as I otherwise should. But I find that the older I grow the more I can realize your present feelings. The manner in which your boy met his death [kicked by a horse] was distressing and seems worse than though he had met his death in the ordinary course of nature. I see also that the grim monster has visited other circles than yours. Well our time here is short, and our end certain, and as time carries us along we should the more realize that our end is drawing near, and should seek to prepare ourselves for that long and incomprehensible future. What are we in this life? — nothing. And how does this life compare with the future? — there is no comparison.

Your invitation extended to me to return home & settle in the old homestead is indeed very kind and I thank you for it, but I shall have to decline. Such a quiet life would not suit my years. I should have no business that would occupy my attention, and in a little time would get tired & uneasy. I have been used to excitements in business and constant changes for the last few years, and I fear to trust myself to settle down so quietly at present.

There is no day here that does not bring its excitements in some part of the state. Our Vigilance Committee has done much good. They have disbanded, but the executive committee meets I believe once a week and in case anything happens, in two hours notice there could be 5000 men put in battle array, and all done quietly and in perfect order. Such an army of good substantial citizens I think has never been assembled together since the days of the revolution. There are a few law & murder men in the state who are constantly making all the trouble they can. They are old line democrat politicians and office holders mostly. But on the whole I think that at least 7/8 of our entire population of the state are on the side of the Vigilance Committee although the democrat office holders and directors of the nominations have so pulled the wires that the legislators elected this year are almost to a man opposed to the Committee. A great many good democrats demurred but you know how that party turn out when it comes to voting. No matter who or what their candidates are, they go their ticket to a man.

You seem to rate me rather hard about my political notions. I for one feel that the time has come when we of the North are compelled to do something for self protection. The South has arrayed itself against the North; she has brought on an issue, the North must try it; or pull down her colors. The reign of southern rowdies must be brot to a close. The disgraceful outrages which have been perpetuated on northern men at Washington & in Kansas [Territory] are unendurable. The South have altogether too long succeeded in our national councils by the aid of the pistol & Bowie knife. The spirit of our free institutions demand & must have a change. The South are composed of but two classes — the master & slave. The master looks upon labor as degrading and upon all white men who labor as no better than their own slaves at home. And all those who are not rich enough to own “niggers” turn their attention to politics or some other way to get their living besides honest labor — and by their intriguing wire pulling & braggadocio, succeed in bullying the North into submission to their will. And I thank my God that a change is rapidly taking place with the great North, and that before 4 years more rolls around, you and I will be very apt to see a better state of things. I speak of these things from an intimate acquaintance with them. I have been in both North & South and have taken pains to examine and compare the different sections. And besides, in California we have suffered more from southern chivalry than from all other ills put together. We have been ruled by southern politicians, put into office by northern rowdies & ballot box stuffers. Those same southern gentlemen who will do anything rather than labor for an honest living here make politics a study [and] turn their attention to no business whatever, and by getting all the low rowdies & shoulder strikers in their train, of course control all the nominations & elections, and by the aid of pistols & knives keep all honest men away from the polls. It is from such things that [make] California a hell upon earth as some people call it. Such causes rendered it necessary to call a Vigilance Committee into being and from the influence of such people the Committee must still keep in being. It is patriotic to talk of our “glorious Union” but the time for action has arrived. Slavery with its hydra head has made a new onslaught upon freedom & free institutions and it must be met and driven back or our country will cease to be the world’s Asylum.

What schemes to advance slavery do not southern men & southern influence set afloat? What has caused our troubles in Washington and in Kansas [Territory]? What has set so many filibustering movements against Cuba, Mexico, and Central America in motion? Nothing but a desire to preserve a balance of power in favor of slavery. And will you — a northern man with a pure love for the welfare of your fellow man — sit quietly by and allow slavery to triumph over liberty and cling to a party & vote for a man which can do no good. The fact that your candidate carried but one state should be enough to convince you that you ought to abandon it and enlist your influence in favor of liberty & the North. As regards Millard Fillmore, I look upon him as one of the great & good men of the present age, but his principles will not now serve the present emergency. John C. Fremont is a Humbug and as a man not to be compared to Fillmore — but it is not men that we are contending for. I hope that you will soon see things as I think I see them now, in regard to politics.

Remember kindly to Mrs. Oaks. I remain yours as ever — A. N. Coleman 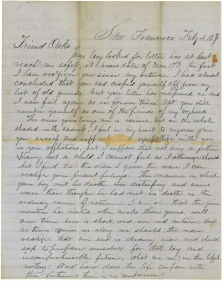 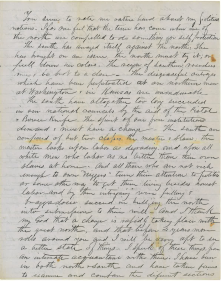