This letter may have been written by Lt. Eli Long (1837-1900) of the First U. S. Cavalry. The letter is not signed, the dateline of the letter has been torn off, and there is no accompanying envelope to aid in the confirmation of its author. However, the content of the letter suggests that it was written in December 1859 and by someone like Lt. Long.

Eli Long was born in Woodford county, Kentucky, on 16 June 1837, and died in New York City in 1903. He graduated from the Kentucky Military Institute, was appointed Lieutenant in the 1st US Cavalry in 1856, and served on the frontier. At the start of the Civil War, he organized the 4th Ohio Cavalry and was appointed Colonel. He saw action in the Tullahoma Campaign, Stones River, Chickamauga and meritorious services at Farmington Knoxville Tennessee, he was promoted Brigadier General in 1865. As a brigade commander of Cavalry in General James H. Wilson’s division, he served with distinction in engagements through Tennessee and Alabama. For his services during the war, he retired with the full rank of Major General in August, 1867.

Given that the author seems to be venting his spleen at high command in the War Department, it seems likely to me that he was a member of the military himself. Examining existing letters and diaries of member of the U. S. Cavalry posted on the Kansas Territory frontier, one in particular written by Capt. Lambert Bowman Wolf (1834-1918) describes events that are germane to the letter’s content. In late September 1859, Wolf wrote that Lt. Eli Long of Co. H was sent with a detachment of 40 men to Beach’s Ranch (on Cow Creek near Pawnee Fork) to escort the mail to the Santa Fe crossing of the Arkansas. While there, Long reported that Kiowa Chief Satank, with three or four of his braves, had killed a rancher on Walnut Creek.

On 21 October 1859, Wolf wrote in his diary that Co. K, while enroute to Pawnee Fork, encountered Lt. Long with his command on the Santa Fe Road heading to Fort Riley — their home station — providing an escort for the eastern mail. These events place Lt. Long in the vicinity of the places mentioned in this letter. It also gives him knowledge of Co. K’s objective in going to Pawnee Creek (where they would eventually establish Fort Larned). Co. K was led by Capt. George H. Stewart [Steuart], a well-heeled Virginia planter’s son, and there may have been some animosity between Long and Stewart.

Whomever wrote the letter seems to have been intimately familiar with Kansas Territory settler Joseph “Price” Perrill (1835-1859) whose death is described in the letter. Whether a U. S. Trooper could be so familiar with Price is debatable — but possible. Price was the son of John Perrill (1806-1879) and Eliza G. Wilson (1812-1854). Price’s father was born near Winchester, Virginia, in 1806. He moved to Highland county, Ohio, with his parents in 1819; was married in 1831; and settled in Brown county, Ohio. Price’s mother died in 1854. In 1856, Price came to Burlingame, Kansas Territory, with his father.

An account of Price’s death reads: “About December 1859, Price was killed by an Indian while on a buffalo hunt on the plains. Price had become lost from his camp and had compelled an Indian to show him the way back. On the following day he was shot while by himself with indications that it had been the work of an Indian.”

[Note: Samples of Long’s handwriting from the Civil War period do not match the handwriting in this letter but this may be due to changes in handwriting over time, pen versus pencil, formality versus informality, luxury of time or lack of it, &c.  I wish to emphasis that this letter may have been written by someone other than Lt. Long; perhaps another member in his command or in another company.]

In my letter to Josiah, I told of the fact of Price Perrell’s having lost his cattle again while on a buffalo hunt. Yesterday we received the mournful intelligence of his having been killed by the Indians. When the cattle were lost, the company (some 10 or 12 men) were camped on Smoky Hill Fork. He went in search of them and returned at the end of 4 days half starved, almost frozen, and without cattle.

The [hunting] company had in the meantime started for home leaving him 8 biscuits hanging [   ]. These so far recruited his strength as to enable him to follow after the company which he did. After two days hard walking, over taking them at the crossing of the Little Arkansas. The next morning he procured a pony from one of the company and again went in search of the cattle. That night he stayed with some men who were camped on the Arkansas north of the Santa Fe Road. This was the last that was heard from him for 16 days when he was found a few miles from Wheeler’s Ranch ¹ — the point from which he started. He was shot in the back, the ball coming out near the centre of the breast. His dog was also shot & lying beside him. There was a camp of Kaws [Kaw Indians, or Kanza] but two or three miles from where he was found and the strong presumption is that it was some of them that committed the deed. He evidently had been killed but a short time or the wolves would [have eaten him]. He was buried at the ranch but will be taken up and brought here.

Thus it is, “In the midst of life we are in death.” Poor Price — rest in peace until the morn cometh. I said to Jo. that the Comanches, Cheyennes, and Kiowas were murdering on the frontier settlements and those crossing the plains when opportunity offered. It has lately been ascertained that the Kaws were leagued with them, furnishing them with arms, ammunition, &c. Doubtless they would be just as ready to kill if they thought there was no fear of being detected.

I saw the Kiowa chief [Satank, aka Sitting Bear] but a short time before they commenced the work of butchery and he then swore that they would kill every white man that was found on the plains. Captain [George H.] Stewart (you remember him, do you not?) is at Pawnee Fork with a company of men to protect the people and mail but they might just as well have sent out a company of old women. ²

Thus it is with our model administration — hundreds can be sent to capture and keep guard over poor old John Brown, and but a handful to protect the women & children of our frontier. What a pity we have not a man to preside at the head of our affairs. I thought when I was out on the plains and saw the handful he had sent there, what a pity it is that the old dotard could not be made to spend a few weeks out here surrounded by a few of the “natives.” Nor do I think there would be many tears shed in Kansas should they take him prisoner and initiate him into the mysteries of Indian life. But enough of this. He will die (politically) soon enough. He ought to be buried out here and have the wolves to prowl his remains. ³

¹ William D. Wheeler’s ranch was at the crossing of the Santa Fe Road over the Little Arkansas. This was approximately 90 miles west of Council Grove. Wheeler and his associates kept a trading post at the crossing.

² In late October 1859, Capt. George H. Stewart, commanding Co. K of the First U. S. Cavalry, was sent out with his company to establish a mail escort station on the line of the Santa Fe Trail. He selected a site on the south bank of Pawnee Fork, eight miles from the mouth of the river, which camp was called “Camp of Pawnee Fork. The camp was moved 2.5 miles west in May 1860 and renamed “Camp Alert.” It was finally renamed Camp Larned.

³ Though the author did not name the subject of his derision, I suspect it was John B. Floyd, the former Governor of Virginia, who was Pres. James Buchanan’s Secretary of War. Unlike his predecessor, Jefferson Davis, Floyd had no prior military experience and his lack of administrative skill was soon apparent. Clearly the author believed Floyd’s allocation of limited resources was ill-advised.

Colonel Eli Long biography in Annals of the Army of the Cumberland by John Fitch
Extracts from Diary of Captain Lambert Bowman Wolf, edited by George A. Root 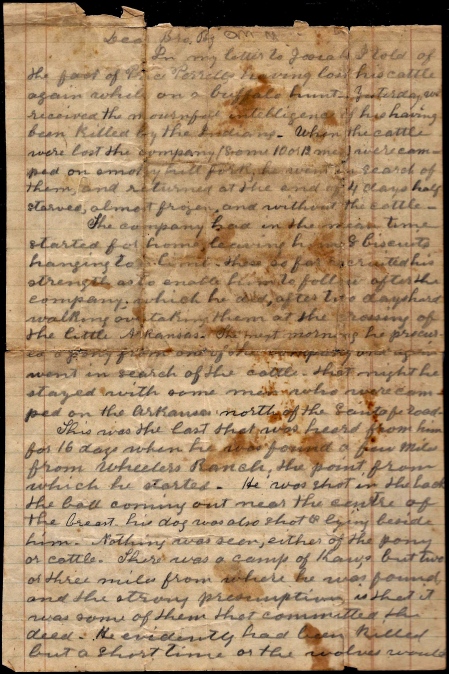 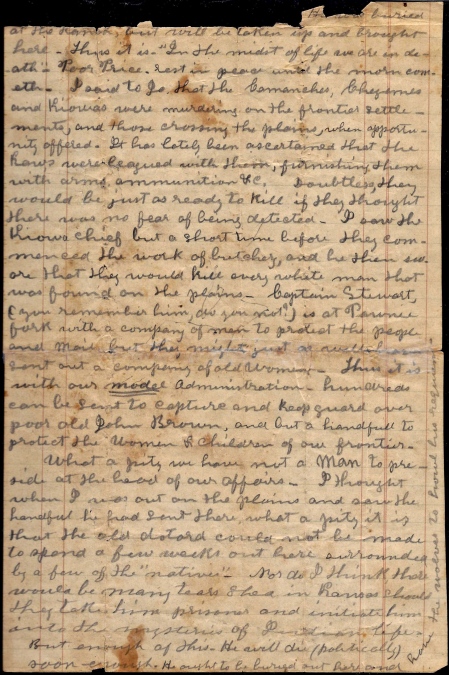