This letter was written by Col. John Tayloe III (1770-1818) of Richmond county, Virginia. A highly successful tobacco plantation owner, he took an active part in public affairs and was considered the “Wealthiest man of his day.” A military officer, he also served in the Virginia House of Delegates and Senate of Virginia for nine years. Tayloe spent the summers at Mt. Airy in Virginia but the winters at his home in Washington City which was called the Octagon House.

John Tayloe III was a Federalist, and not terribly supportive of President James Madison and the war with England that began in 1812, but he was active in the Virginia militia and commanded a regiment of DC cavalry. When the British marched into Washington in August 1814, there was a French flag flying outside the Octagon. Ann Ogle Tayloe had offered the house to the French consulate, in the hopes of sparing the house from destruction at the hands of the British, and he was occupying the house when the British arrived in the city. The house probably would have been spared even if it hadn’t been effectively a “diplomatic residence,” since the British were under strict orders not to damage private property.

President James Madison and his wife, Dolley moved into the Octagon House on September 8, 1814 after the burning of the White House by the British. President Madison ratified the Treaty of Ghent, which ended the War of 1812, in the upstairs study at the Octagon on February 17, 1815. The Tayloes received $500 in rent for the Madisons’ 6-month residency at the Octagon.

This letter was written just two weeks before the British overran the Nation’s Capitol and burned many of the public buildings, including the White House and Capitol. It is presumed that Col. Tayloe was recruiting in Virginia at the time.

Col. Tayloe wrote the letter to Benjamin Oliver (1738-1818) who resided near Newcastle Town (now defunct) on the banks of the Pamunkey River in Hanover county, Virginia.

I came in your carriage as far as this — & a charming one it is — but I think too heavy for a pair of horses over muddy & hilly roads — & these are at this time shocking indeed. I hope my coachman will deliver your carriage and horses — as well as they now are — & a finer pair, I know not — or a more serviceable pair — when properly treated, & that they have always been in my hands. You will please send Gowan ¹ over to Joppa. He can get a convenience from there. He can stay one day with you  to show your man how to clean up your carriage (if he is not an experienced coachman) & drive the horses for you, if you like. They are certainly the cheapest pair in America — for deducting $60 which you would have paid to get home your carriage from Washington, they stand you in only $390 & worth $500.

I have paid for you the following expenses — Potomac Bridge,  Turnpike & feed from Washington to Neabsco = 4.20; gave Gowan for expenses = 20; paid Bailey for bringing carriage from Philadelphia = 60. Total = $84.20 cents

Gowan will hand you his bills & settle his expenses with you. The sum above you will please send me by him, referring to my last by mail. And with compliments to Mrs. Oliver, with a hope she will be please both with carriage and horses, I am truly yours, — John Tayloe

Your horses have been newly shod here & leave this in high health & condition. I am ordered down to the lower camp on business militaire & shall be glad to hear from you by Gowan to Mt. Airy.

I was surprised to see neither crest or cypher on your carriage.

¹ Gowan was a slave belonging to John Tayloe III; he was 19 years old in 1808/9 and served Tayloe as a “junior coachman.” See Slaves.

² The Potomac Bridge was built in 1809 between the district and Alexandria. It was built on piles effectively prohibited further navigation up the Potomac. 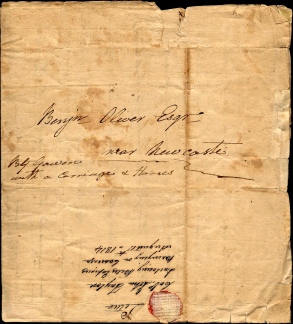