This letter was written by Joseph Barclay Scott claiming to be the Acting Quartermaster of the 3rd Pennsylvania Heavy Artillery (also known as the 152nd Pennsylvania). The letter was written from Fortress Monroe, Virginia, in September 1863. I have searched through the roster of the regiment, however, and cannot find anyone by that name. The nearest name is Pvt. George B. Scott of Co. I who did not join until December 1863.

No doubt you have thought it strange you have not heard from me for the last 6 months past. It is not that I have forgot all about you, but I must plead neglect. I am happy to inform you I am still in the land of the living and enjoy in that blessing — good health.

My time has been employed for some time past on board one of the transport steamers in charge of a guard for the exchange of prisoners between this fort, City Point, Fort Delaware, Lafayette &c. I am relieved from that [and] I am now Acting Quartermaster Sergeant of the regiment which numbers all told 17 hundred & 50 men — two companies in Fort McHenry, Baltimore. I have had to encounter some few hardships & privations since I joined but I hope the worst is over. I expect the appointment in full making [me] one of the four sergeants on the staff of the regiment. I must consider myself fortunate in joining [Col. Joseph] Robert’s Artillery. I may say it is the best service in Uncle Sam’s employ, but the duty [is] very heavy. But we do not get the knocking about as much as the men in the field. Comfortable quarters & good food, we can boast of.

How are all the boys? I got acquainted with your brothers William, Cooper, & Nelson Dinsmore ¹ &c. I supposed they were all spared to return home to their friends there. I have two years & two months to remain if the Lord should spare me so long. However, I made the bargain [and] I must content myself & stick it out if my services should so long be required. I should like to be at liberty. My two brothers are both gone to Australia — Queensland; both young men, the oldest 25 and the other 22 years, and every prospect of doing well if health permits. I should like to be able to join them.

I made them acquainted at home of my present occupation. my mother & sisters take it very hard — me being the oldest of the pile — to think I should throw myself in such a fit. Give my best wishes to Mrs. Ramsey, your Father, in fact all the people in Peach Bottom I am acquainted with. I will get a furlough about Christmas & I shall certainly make it my business to come & see you & spend a few days with you.

I have a favor to ask — that is, I should like to get about half dozen printed shirts made. I cannot neither buy the stuff or get the shirts here & as I have no one to do me the favor without writing to Cincinnati & the distance is too far. If Mrs. Ramsey will trouble herself so much in my behalf to buy me the shirting and get them made for me, I will remit you the cash. I should like each one different pattern — neat, but not gaudy. I have to dress a little stylish now. I wear my own clothing with the exception of pants daily unless monthly inspection [when] I will have to turn out in uniform.

I must say a few words about your brother-in-law. I forget his name. I think it is Mr. Heap (I mean the gent that rode in the buggy with us from ____ Wyan’s house). Give my respects to him & tell [him] I am all alive without the whiskey. I can get plenty of it in the commissary but seldom touch it. I conclude hoping to hear from you at your earliest convenience. — Joseph Barclay Scott 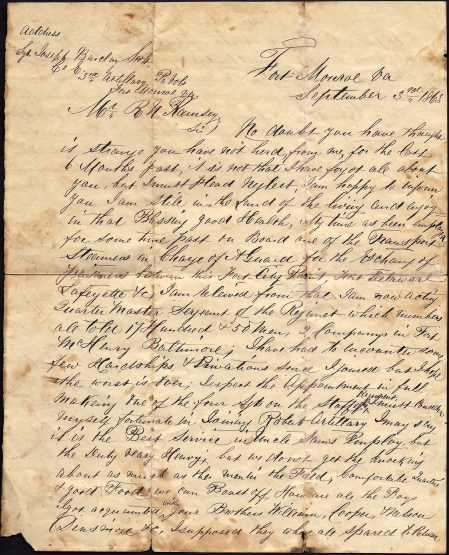