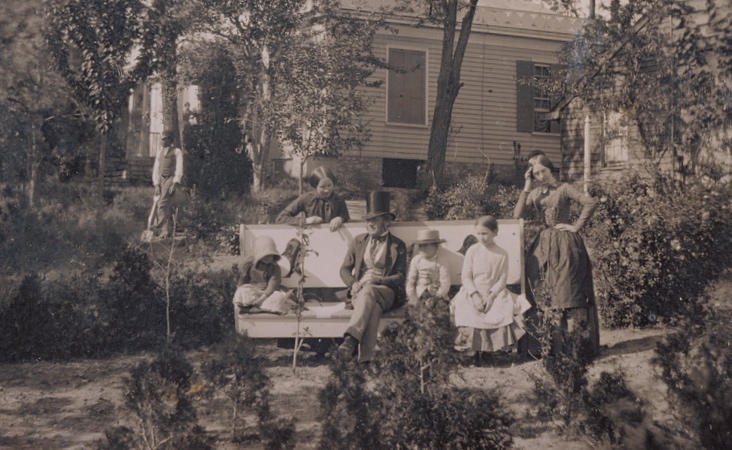 This letter was written by German-born Augustus Schlapp ¹ (1837-1919), a corporal in Co. F, 5th Iowa Cavalry. Augustus [or “August”] enlisted in the unit on 25 October 1861. Prior to his enlistment, he had been employed as a book seller in Burlington, Iowa. The men that enlisted in Companies E, F, and G were residents, with few exceptions, from the states ofd Iowa or Minnesota, the majority from Dubuque. A review of the rosters in these companies reveals that nearly two-thirds were German born. When the members of Co. F and G first enlisted, they were assigned to the “Fremont Hussars” — a select cavalry battalion appointed to guard Major General John C. Fremont, then the commander of the Western Department of the Union army. After he was relieved of command, however, these companies were absorbed into the Curtis Horse by order of Brig-General Samuel Ryan Curtis.

In this letter, Augustus relates the humorous tale of his capture on 6 May 1862 by Confederate cavalry under the command of Col. Thomas Claiborne at Lockridge’s Mill seven miles from Dresden, Tennessee. He was paroled at Corinth, Mississippi, on 15 May and one year later he was promoted to sergeant. He re-enlisted in January 1864 and was promoted to First Sergeant in April 1864.

That upon which I in my last letter prepared you has finally come as I expected.

On the second day of May, 128 strong with two teams and 8 days provisions, we started from Camp Lowe with I don’t know what intention. That day at 4 o’clock we — under heavy rain — reached Paris, which place on account of the heavy rains we did not leave until on the 4th — Sam’s Day. We marched about 14 or 15 miles and camped 7 miles this side of a little town named Dresden, when at about 10 o’clock that night we received reliable information that 3,000 Rebel cavalry cut off our retreat via Paris, and were then on our pursuit 4 miles in our rear in camp. Upon the receipt of such agreeable news, we — after the withdrawal of our pickets — left our camp at 11 o’clock and rode in a complete darkness, only now and then lightened by a distant flash of lightning under a drenching rain till half after 4 o’clock in the morning at which time we reached Dresden. Here, by an unreasonable notion of our commander — Major [Carl] Schaeffer [de Boernstein], we stayed till 2 o’clock in the afternoon when we [again] started off at a very slow gait. Seven miles from Dresden we stopped and camped, upon order.

[After] unsaddling our horses and [while] preparing our supper, all at once we were attacked by 2200 Secesh cavalry. We slapped on our saddles and off we went to where our main force was encamped (you here will remember that 40 out of our whole force of 128 — I being one of them — kept a mile in the rear of the balance as rear guard). Many of this — our rear guard — was killed, wounded, or taken prisoner before they [even] got to their horses.

When we got to the other camp, they was not mounted but most of them soon became so and we formed a line of battle. But after a very short stand, [we] were ordered to retreat, which was done in no order at all but in an astonishing hurry. Then commenced such a funny race between Secesh and Union soldiers which I never witnessed before — horses plunging into holes, men tumbling off and taking to the bushes, with the constant roar of musket, carbine, and pistol fire, saber rattle, & Indian-like yell of the men, made a laughable fuss for a cool listener.

To make a long story short, 61 of us were taken prisoners — Charles Ende, Henry Schlapp, and myself with and among them. We then were shown the country down south in Dixie, which is a very hard road to travel — particularly on foot or in an old wagon or cattle car on an awful rough railway. We went through on an old crippled, lame horse barebacked. We had to keep our legs and heels in a swing all day to make our racers keep up. On our road south we went through Como, Caledonia, Makony, Mooresville, Spring Creek & Jackson, Tennessee, as far as Jackson, Mississippi, [and] from there back to Corinth where we was sent as parolees across the lines into Halleck’s camps. There we met with severe ill treatment from Halleck who — contrary to our oath — put us to hospital work such as digging graves and burying [the] dead.

At last we were sent to our regiment and upon refusing to report for duty before regularly exchanged, were put in the guard house and bound to hard labor. After two weeks confinement, they read us an order which relieved us of our parole. Most of us believed the order to be a counterfeit and said so, refusing to do duty. Those 24 in number were dishonorably discharged or brought over the lines of our camp. Charles Ende, Henry Schlapp & myself entered the company again. ²

Hoping that all of you continue in pleasant health & humor. I remain your sincere friend, — Augustus Schlapp

I expect a letter from you as soon as possible, not having received such a one since writing my last to you in April. Please direct letters to Augustus Schlapp, Camp F, Curtis Horse, Fort Heiman, Tennessee.

If letters from the old country for me arrived, please send them. The postage I will settle with you when I come back. Hoping such may soon be possible.

¹ The Portrait and Biographical Album of Desmoines County, Iowa

“August L. Schlapp, a member of the wholesale grocery house of Biklen, Winzer & Co., was born in Hesse-Darmstadt, Germany, July 27, 1837, and is a son of H. L. Schlapp, also a native of that country. He was educated in the gymnasium of his native city, taking a classical course, and then was employed in an antiquarian book-store for a time as a salesman, but subsequently emigrated to America, coming direct to Burlington, Iowa, which he reached in July 1857. At this time he was but twenty years of age. He engaged as a farm-hand in Des Moines County, also doing some work of he same character in Henry County until the war broke out, when he enlisted in the Fremont Hussars, an independent cavalry regiment, but was subsequently transferred with his company to the 5th Iowa Cavalry, was captured near Mayfield, Ky., in 1862, held a prisoner for two weeks and discharged on parole. The parole was not respected by his superior officers, and, with others of his comrades, he was forced to return to active duty. His promotion to the rank of Second Lieutenant occurred Oct. 20, 1864. Until 1863 Mr. Schlapp’s services were employed in hunting guerrillas, but at that time his regiment joined the main army, the Army of the Cumberland, before Murfreesboro, and participated in the battles of Murfreesboro, Shelbyville, Tullahoma, Chattanooga, capture of Atlanta, battle of Jonesboro, Franklin, Nashville, Decatur, the raid through middle Tennessee, Wilson’s Raid, the capture of Selma, Ala., and of Columbus, Ga. He was mustered out at the close of the war, Aug. 20, 1865.

On his return from the war, Mr. Schlapp located in Burlington, Iowa, and engaged with Starker & Hagemann, wholesale grocers, as shipping clerk, and one year later left them to engage in the retail grocery business at Ft. Madison. He carried on that business successfully until 1875, when he sold out, returned to Burlington, and with Biklen and Winzer succeeded the wholesale grocery house of Starker, Hagemann & Co. Mr. Schlapp has been an active member of the firm of Biklen, Winzer & Co., the most extensive house in this line in the city since its incorporation.

Mr. Schlapp was a Republican for many years, but is now known as a member of that class called Mugwumps, and, having never been an aspirant for the honors of public office, has devoted his attention strictly to business pursuits. He is a member of the Turners’ Society, the Crystal Lake Shooting Club, the Burlington Commercial Club, and Burlington Schuetzen Verein, and has always taken an active interest in all that pertains to the welfare and development of the city, being recognized as one of the representative business men.”

² There were “21 soldiers captured at Lockridge’s Mills that refused to return to active duty unless certificates of capture and exchange were furnished either by the Confederate or United States Army. The former prisoners feared that if captured again, they would be treated as spies and shot. To quell the uprising, Colonel Lowe put the men under guard and forced them to perform hard labor. For two weeks the men persevered until General Halleck ordered them discharged for mutinous conduct on June 27th. Private Conzett would describe the discharge as follows:

The regiment was ordered out in battle line under arms and in full uniform. The prisoners were then placed in line in front of us. The Adjutant then stopped to the front and, in a trembling voice, read Gen. Halleck’s cruel order to them. The order was given them to about face, forward march. The drum corps played the Rogues March and so escorted them out beyond our lines into the Rebel country, infested by guerrillas, robbers and scoundrels and deserters from both sides who would not hesitate to rob and kill them on sight. They were forbidden to come into our lines anywhere for help. Oh, it was the saddest sight and hardest duty we were ever called to perform! We were not ashamed to let our tears flow freely.

See: They Met at Lockridge’s Mills by Dieter C. Ullrich 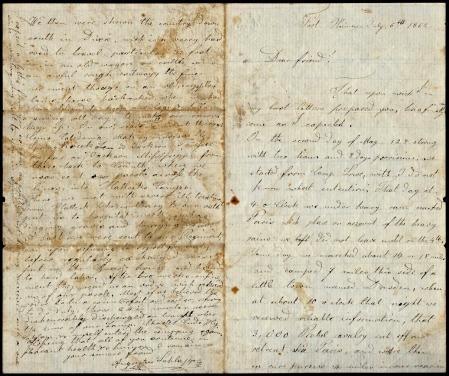 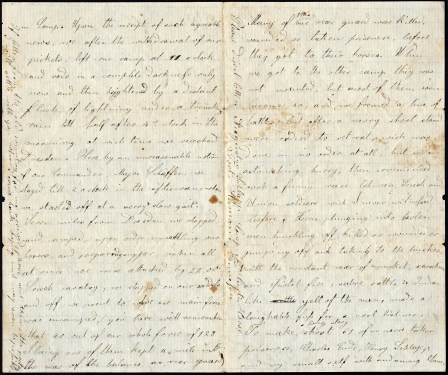