In his early years, Septimus was educated at Green Academy in Huntsville, AL. He attended the University of Virginia in sessions 9-11 (1832-1835), and returned to Huntsville to read law with a local attorney. He passed the Alabama Bar in 1838 and practiced law, primarily dealing with estates, in Huntsville until his death.

Septimus served the Confederacy as a member of the Alabama State Legislature from 1861-63 and a Colonel in the Confederate Intelligence Division during the Civil War. 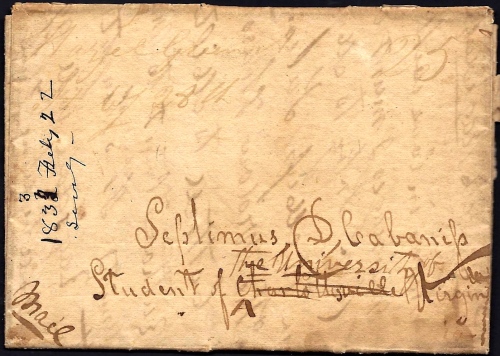 I have at length taken my pen or seat to answer your long and very interesting letter though I believe my last dated January 1st was answer enough. However, I expect you would be glad to hear what has transpired since my last. I shall commenced with what has taken place most recently.

Today (the 22nd inst.) is you know the birthday of our revered hero (Washington) and is celebrated by the citizens of Huntsville and its vicinity. The order of the day will be conducted as it was last year. The oration will be delivered by [Judge] Edwin R. Wallace (as you learned by your Democrat) of Huntsville. Tonight the most splendid ball that has ever been in the place. Last night Susan [E.] Crumby was married to one [Samuel] Bruton near Crossroad; also a daughter of Col. Smith [names Mary Sophrenia Smith] to Joseph [Embry] Dupree. Last Saturday week Dr. W. Humphries & Margaret Walton took a flight to Tennessee. Walton opposed the match though since it has taken place, he has become reconciled.

I was down at N. Market the other day and had the honor (if you would term it so) of being introduced to Mrs. Dumfries and spent some few minutes quite agreeably. I came from there to Mr. Ingram’s and found Martha Ragsdale and L. Pool. Soon after, up rides Norris Pines. L. Ingram & I. Ingram was at home, I’ll have you know. Mr. D____ also. Sep, you may imagine in what way the time was spent at Mr. Pool’s with the said same ____ [and] also E. Mason.

To continue, some time in January last there was a quilting at William Coleman’s at which the most of the ladies and gentlemen assembled among whom was Penelope King ¹ & Charles P. Cabaniss. These two I will designate, among others too tedious to enumerate. About two hours previous to the setting of the sun, the quilt was lifted, the room was hastily adjusted for dancing, [and] the whole house soon resounded with the best music. We instantly selected our partners (C. P. C. & P. King headed the real, of course). The fun commenced and continued until one in the morning. By this time, we were desperate fatigued. This being observed, the music pushed the Ladies shipped gently across to an adjoining apartment and returned no more. We retired too.  In the morning we arose, prepared for breakfast. By this time the Ladies were elegantly adjusted and resembled so many of the morning roses that so commonly decorate our delicious gazebos. We were ordered to breakfast after which we terminated the fun with a kertillion [cotillion]. Sep, you cannot imagine how I figured and ____ P. King, M. Ragsdale, and others and fell heals over heads in love with P. & M.  Enough [of this].

There are some other marriages I must enumerate upon my pages — viz: Dr. [Edward] Irby to Miss [Mary G.] Mastin, George H. Graham to Miss Julia Ann Cain — all of Huntsville. The widow [Martha A.] Thurston to James [B.] Harrell, Sally [Sarah] Ware Cottrell to Milton Rozell of this neighborhood. Rutha Flynt to Manly of Hazel Green (he is a blacksmith). It is thought that Dr. [George D.] Norris and Martha [D.] Ragsdale will agree in their selection. ² If they do, it will be a fine thing should they generate for he is at least 4 foot high; she only seven foot in height. You must not mention this supposed match in any of my epistles to this burg unless directed to me.

Sep, you frequently grumble in your letters of my writing so seldom. The only apology I can offer is that I write whenever I think I have sufficient news to fill a letter and that is as frequent as you write. I frequently hear your friends grumbling at your indifference for them — Jn. P. Ingram particularly. He says he does not want to receive a letter from you.

John Stealman says write and he will answer [and] that it would do him proud to receive a letter from you. William has gone to Jackson to farming. J. H. C. to Creek Nation (grocery). As for my part, I am yet living with Tate and am now waiting for an answer from Dr. Humphries to the proposal I made him to do business for him. I am in hopes I can inform you in my next what occupation I shall follow. In my next, I can tell you how J. M. C. likes his _____. — C. P. Cabaniss

I wish you to say something good to J. Rarrus for me. Write me what your progress has been. Whether or not you enjoy good health. Let your letters be more frequent & lengthy, filled with substance & mention not J. Martin’s name for God’s sake. And then there will be a difference between yours and mine. You well recollect the phrase [Dum] vivemus Vivarmus [Latin phrase meaning, “While we live, let us live.”]. If you do, then study while young and prosper for such is my prayer for yours, mine, God’s, and others sake. — C. P. Cabaniss

² Martha D. Ragsdale and Dr. George D. Norris were married in Madison county, Alabama, on 9 April 1833. They were married by John Ballard, JOP.